How Mauricio Pochettino must wish he could press the rewind button on his life. It was not long ago that he was one of Europe’s most impeccable and admired young managers and his Tottenham team were a unified, emerging force, a side that made miracles happen in the Champions League.

Now, just four months after he stood on a field in Amsterdam and celebrated fairy tale progress to the biggest final in club football, Pochettino is a manager for whom nothing will go right. His stock remains high, of course it does. It is only just October.

But this result is a hammer blow, not just to his team’s Champions League hopes but also to his own self-respect. This was humiliation at the hands of a genuine European superpower and the aftershocks will now be felt from dressing room to board room. 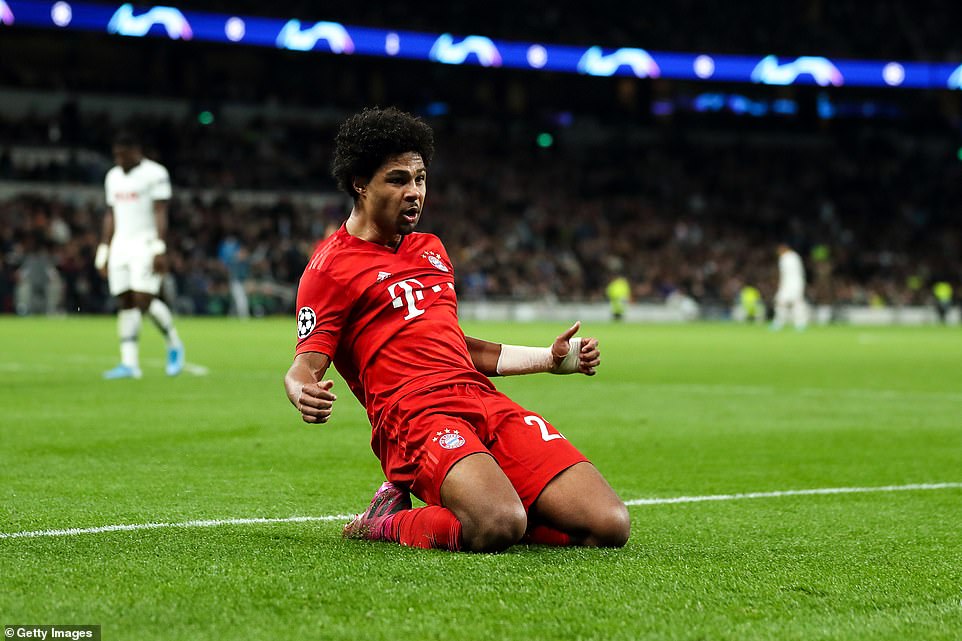 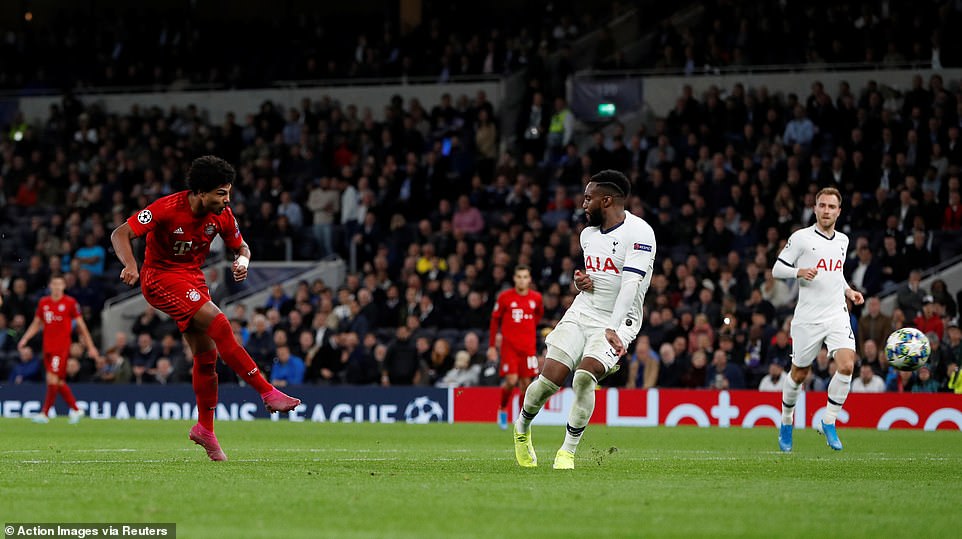 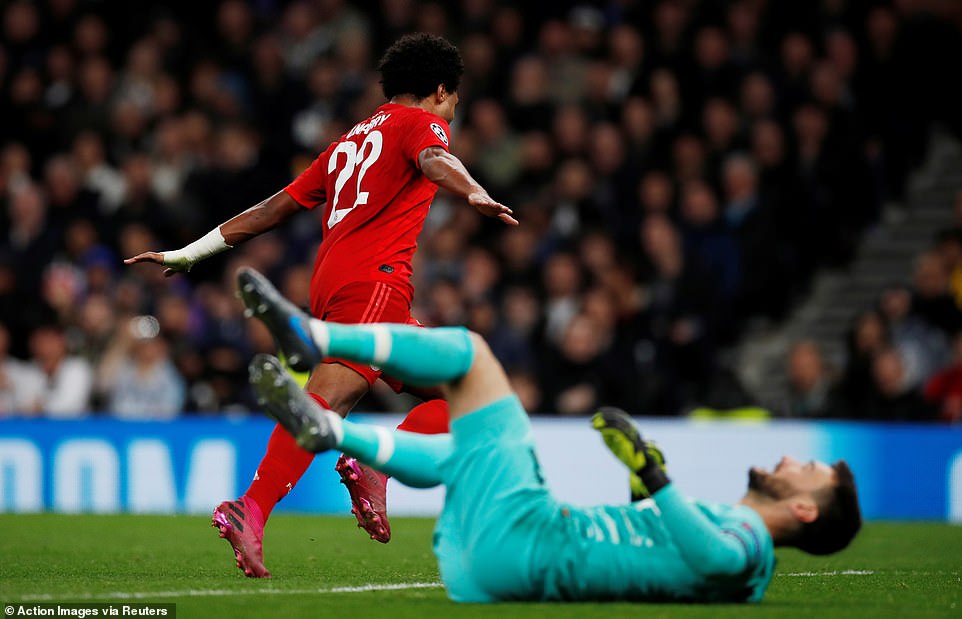 The Bayern forward, in scintillating form, celebrates his hat-trick goal as Hugo Lloris is left to pick himself up off the turf 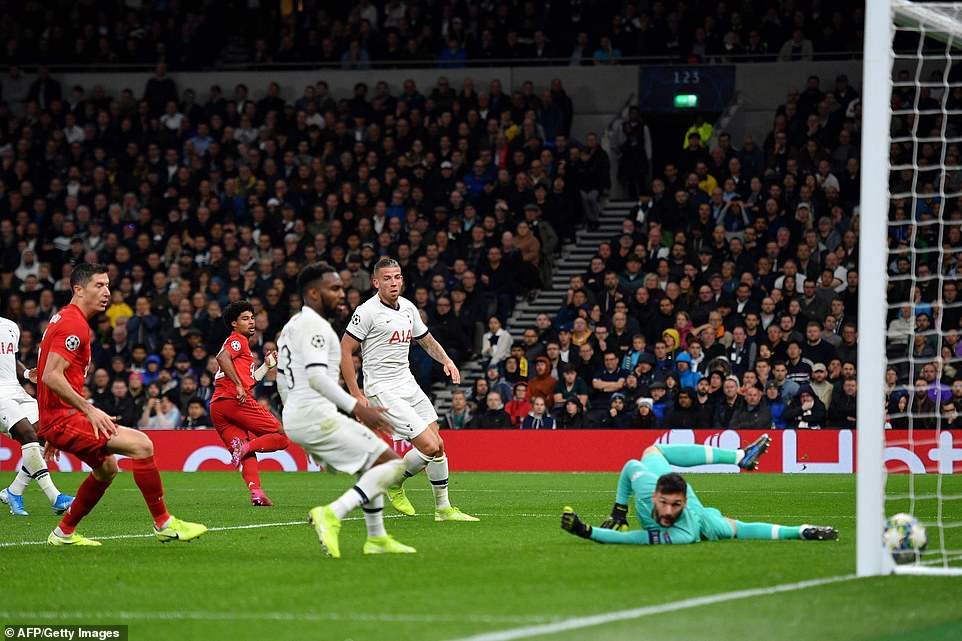 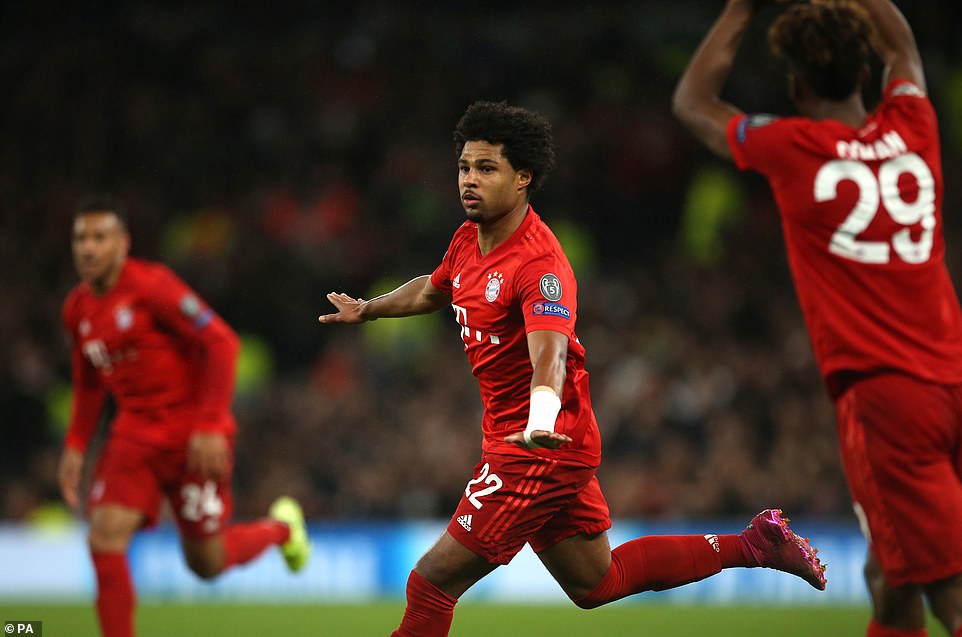 The 24-year-old made it 3-1 to the visitors in the 53rd minute, before they went on a rampage against Tottenham 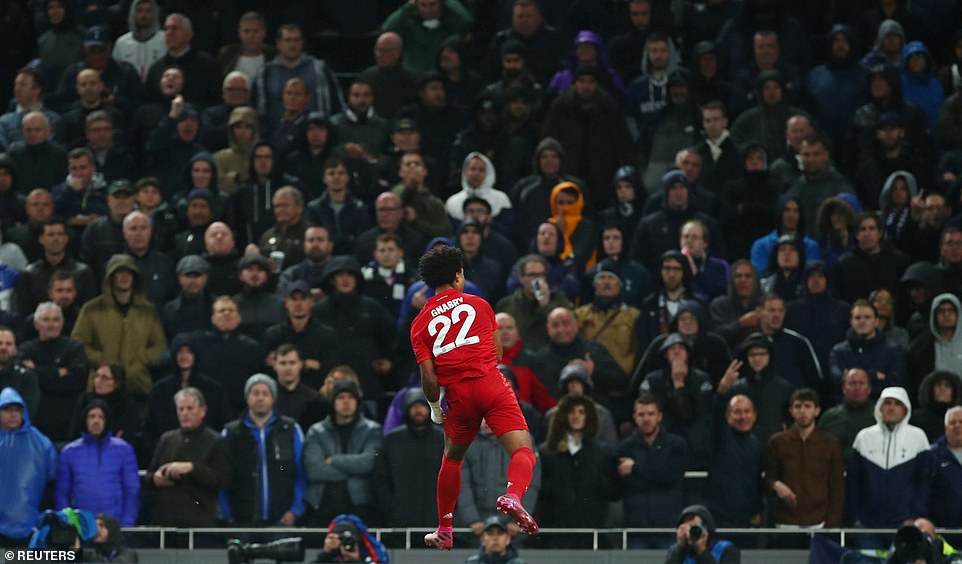 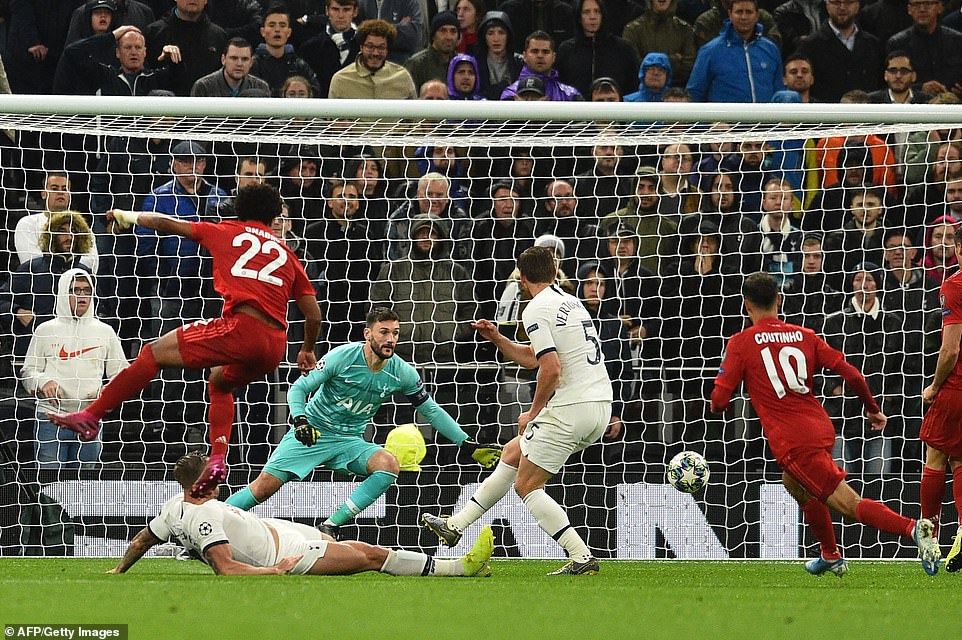 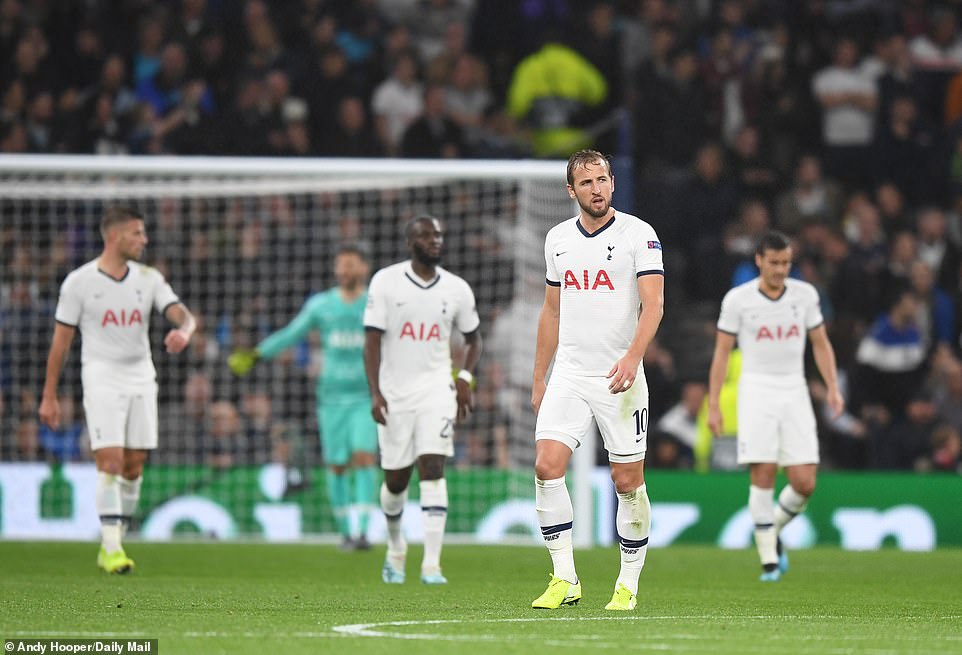 It was a chastening night for Tottenham, who have struggled to find their form so far this season in England and across Europe

MAN OF THE MATCH: Serge Gnabry

At Tottenham, they have been wondering about Pochettino for a while. His players are no longer sure he believes in them or even particularly likes them while his chairman Daniel Levy is tiring of what he believes to be Pochettino’s opaque political manoeuvring.

Good results will always protect a manager from stuff like this. If your team is winning, you can get away with pretty much anything. But when things go wrong on the field, there is nowhere to go and at full-time here Pochettino will have looked over his shoulder to find only a tight corner for company.

Some of what happened here is undoubtedly his fault. All teams will lose heavily from time to time but this was on a different scale. The management – or otherwise of his squad – is Pochettino’s responsibility and he is failing. His personal countenance is strange. He does not look happy and he does not sound happy.

If he thought this could continue without some kind of reckoning eventually arriving on the field then he was very wrong. And here it was, a result to embarrass Tottenham and their proud, forthright manager. By full-time this had become a Turkey shoot for Bayern and it is only pertinent to ask now whether Pochettino will still be in north London by Christmas. What is clear is that this cannot go on.

From 1-1 with seconds of the first half remaining to the kind of score line that used to require a bracket on the old BBC video printer, Tottenham actually lost the final 45 and a half minutes of this game 6-1. One player – Bayern’s former Arsenal midfielder Serge Gnabry – scored four times all by himself in the second period.

And strangely, there had been so sign of what was to come early on. This was not one of those games that was heading in one direction right from the start. This was not Manchester City 8 Watford 0, for example.

No this was a game that began well for Tottenham but then got away with from them with the speed of a truck travelling downhill without a handbrake and maybe that is even more worrying. Once the momentum changed here, Tottenham just could not get it back. 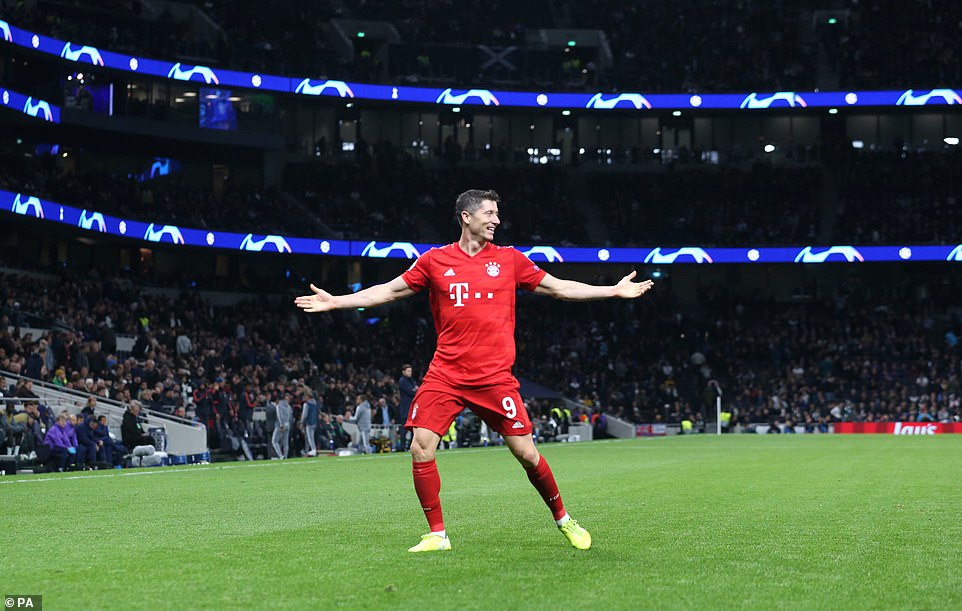 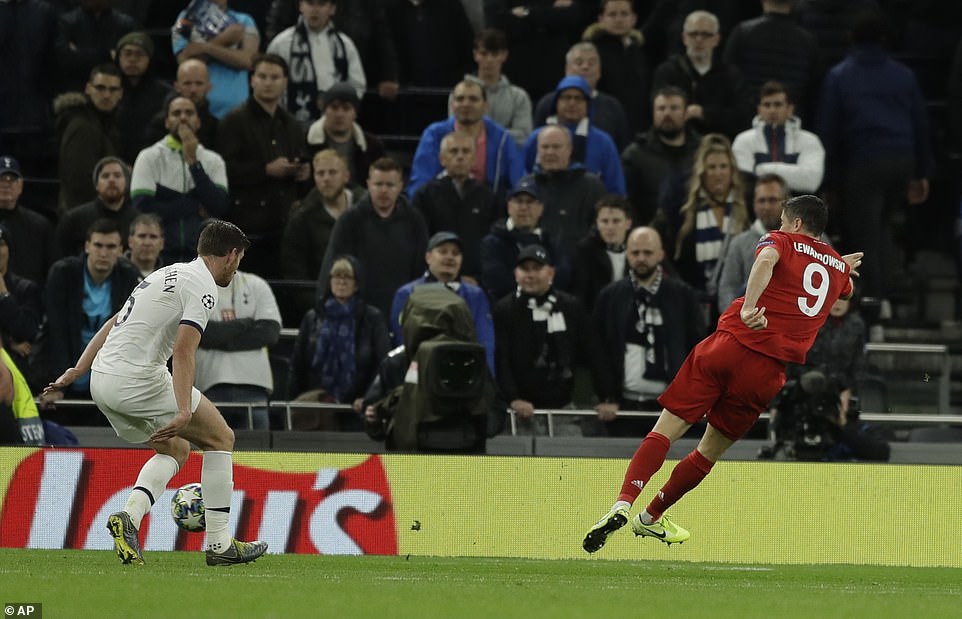 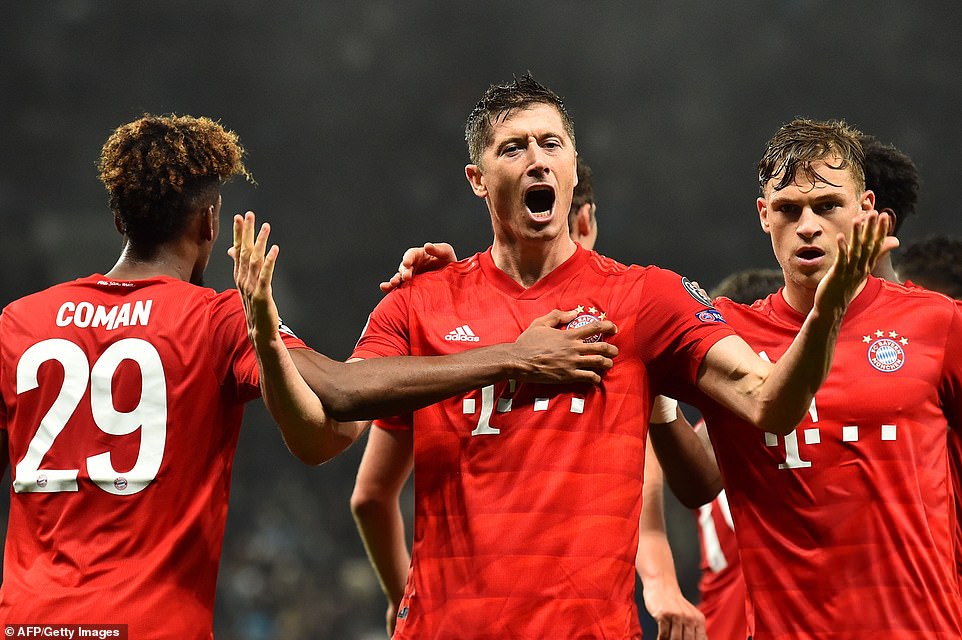 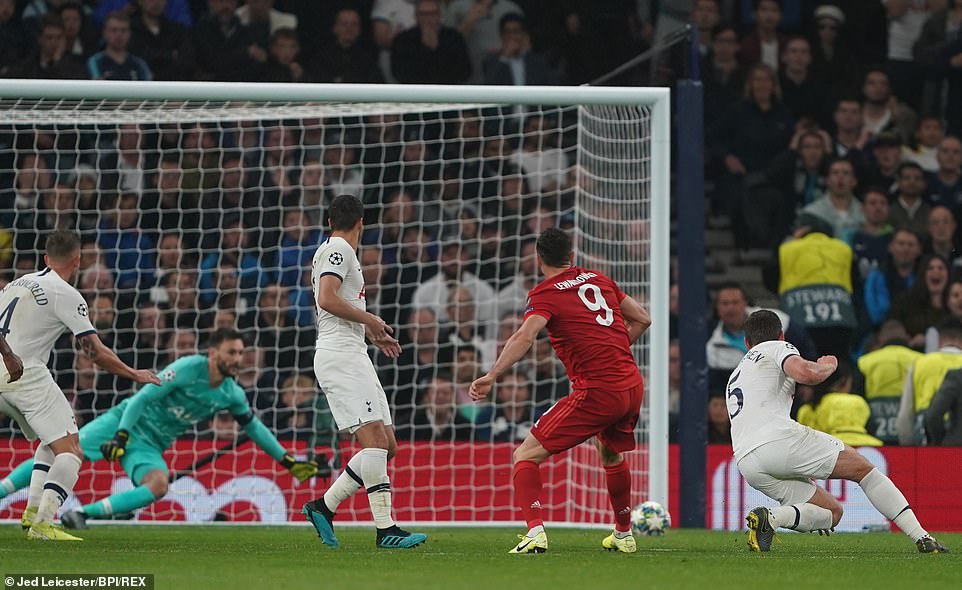 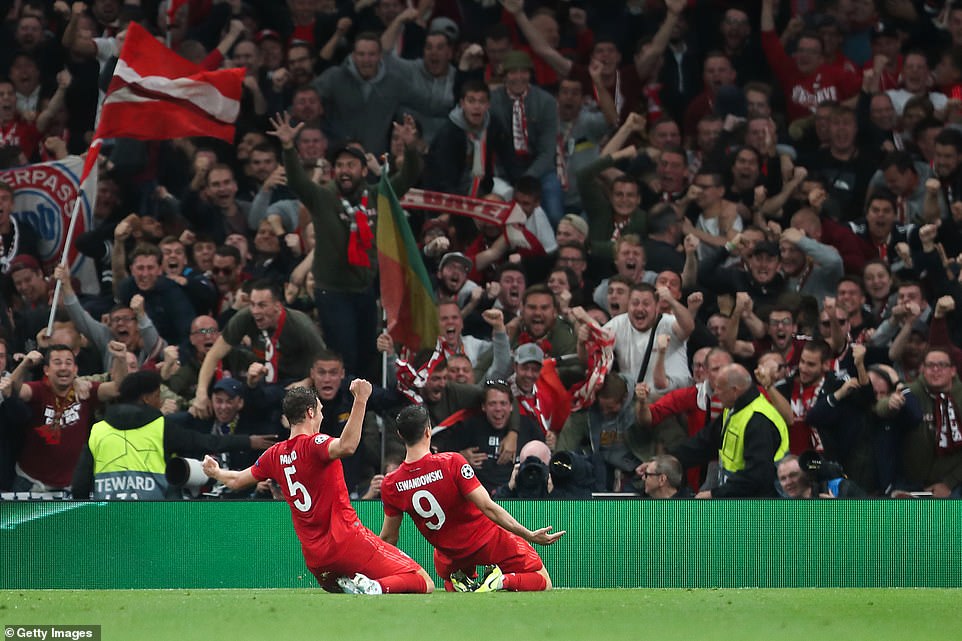 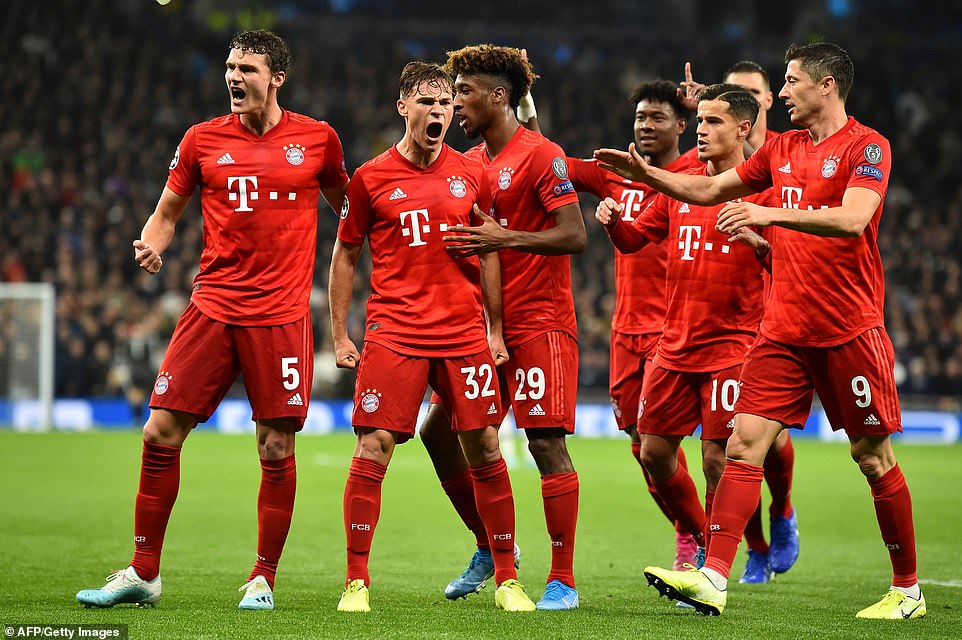 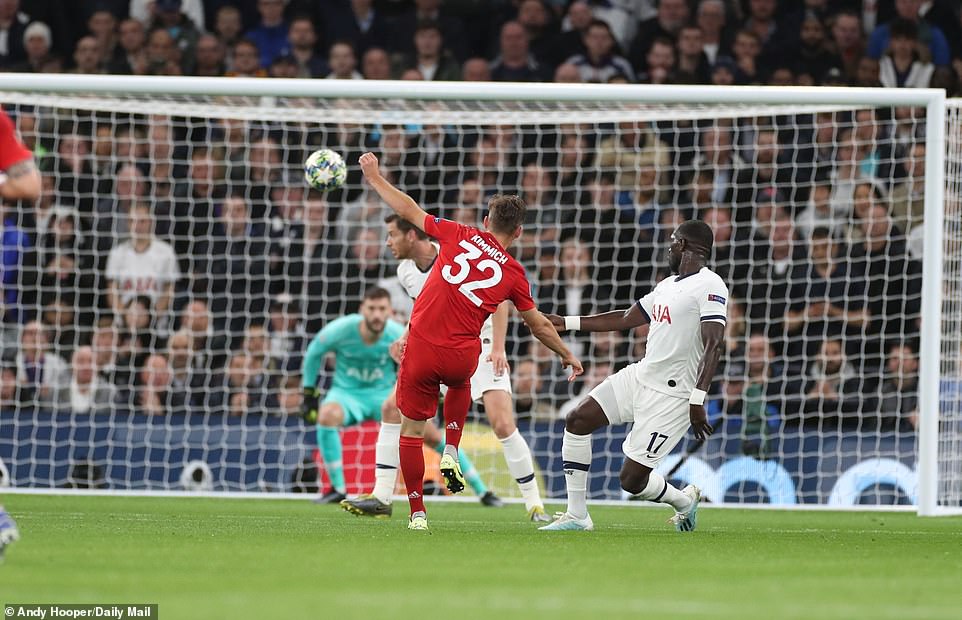 For 25 minutes Tottenham were the better team and this cavernous stadium thrummed to the rhythms of the home team’s neat, progressive football. Tottenham were hungry and fluent and when Son Heung-min drove a right foot shot across Manuel Neuer in the 12th minute to score, it was actually the third good chance of the Korean’s evening.

Bayern equalised almost immediately and that was clearly significant. Joshua Kimmich whipped a devilish shot across Hugo Lloris from 25 yards and the Germans were back in the game.

Still, Tottenham were superior for a while longer. Son had another chance and Tanguy Ndombele had one too. Neuer saved both times.

But when the pendulum began to swing Bayern’s way in terms of territory and possession, the shift in the game was remarkable. 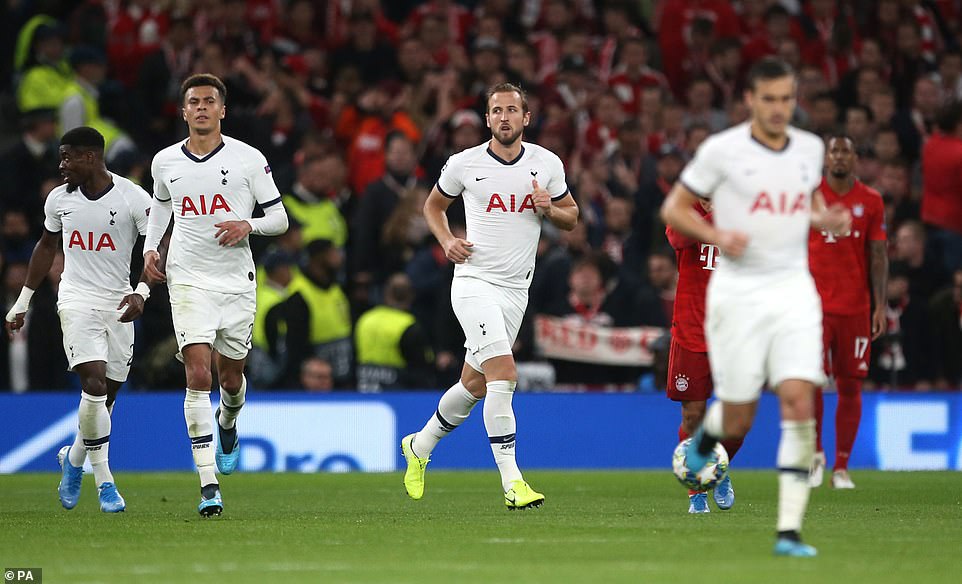 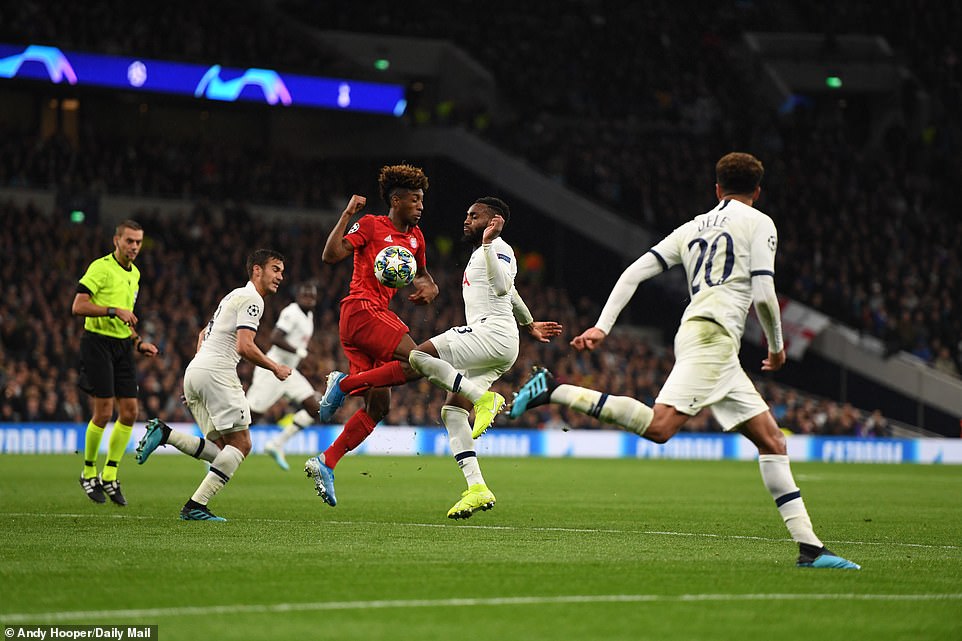 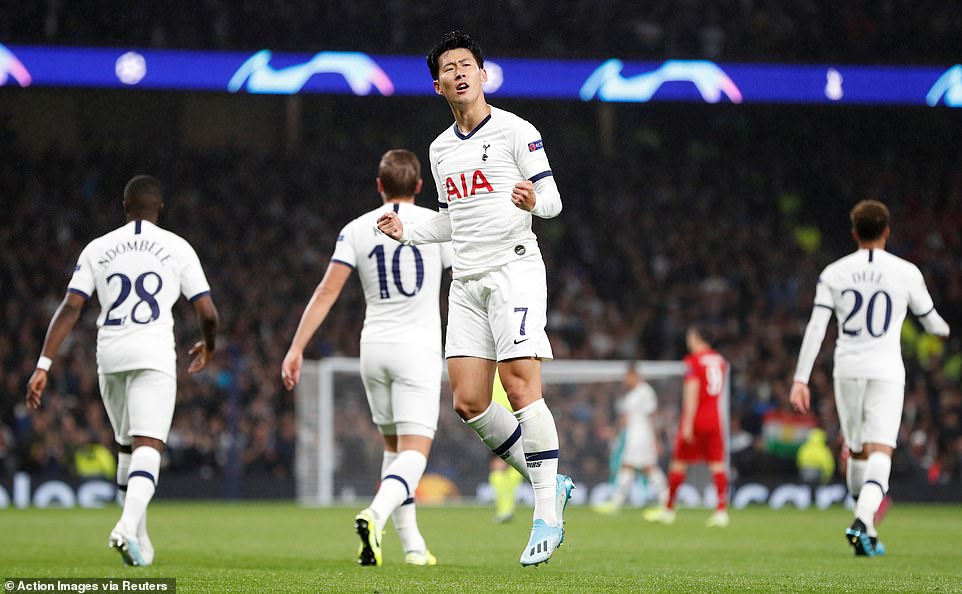 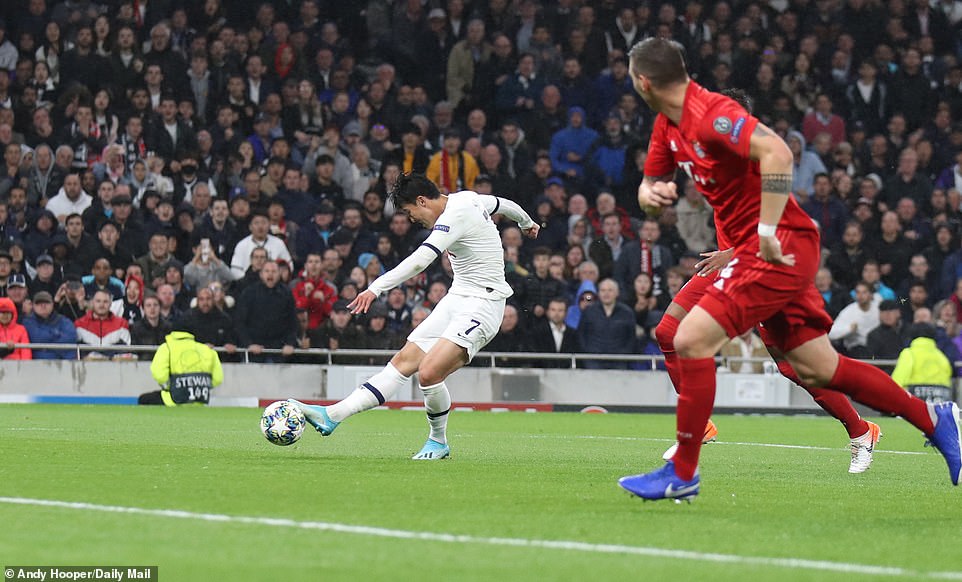 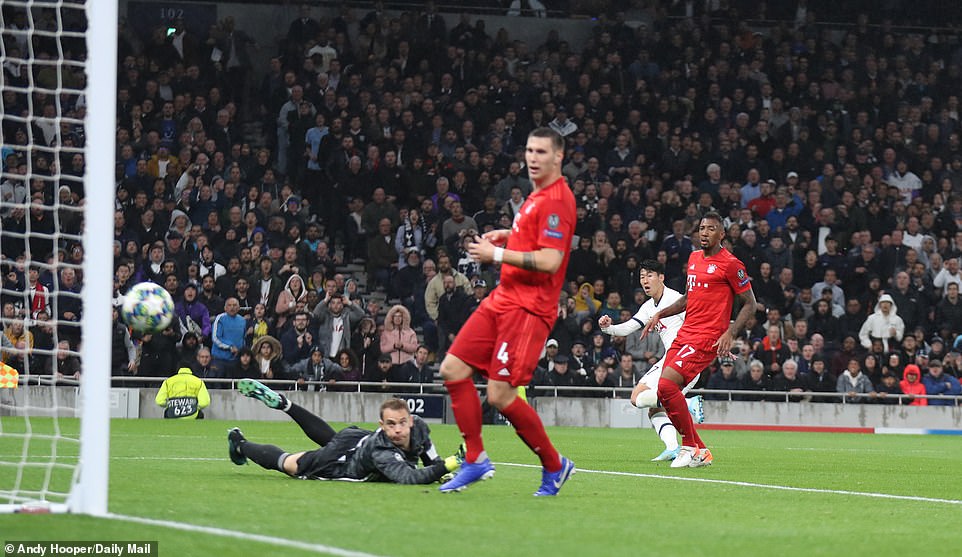 The Tottenham forward squeezes his shot past Bayern goalkeeper Manuel Neuer, who got a slight touch on the ball

Robert Lewandowski’s goal in the 45th minute was magnificent. A turn and shot so sweet and true that it should ideally have been accompanied by a rifle crack. And that, it transpired, was the game.

Spurs started the second half hungry for parity, keen to show they could compete. But Bayern picked them off on the break like street muggers. Gnabry scored twice in three minutes, his first with his right foot – cutting in from the left to score like the departed Arjen Robben used to – and the second with his left after Harry Winks had lost the ball.

With only 55 minutes gone, Tottenham were suddenly facing a fight to salvage dignity. Briefly they threatened to escape with their heads up as Harry Kane converted a penalty after Danny Rose was fouled and then Moussa Sissoko and Christian Eriksen almost made it 4-3.

That would have been interesting but the final ten minutes were ultimately a car crash for Tottenham. Every time we looked up it seemed as though Bayern were scoring. Gnabry struck in the 83rd and 88th minutes while Lewandowski did so in the 87th.

Pochettino will have felt each blow like a jab to the solar plexus but maybe one day he will look back and realise he had this coming.

Sporting success can make people feel close to invincible, untouchable even. But nobody ever is and when he walked down the tunnel at full-time Pochettino suddenly appeared desperately and humanly vulnerable. 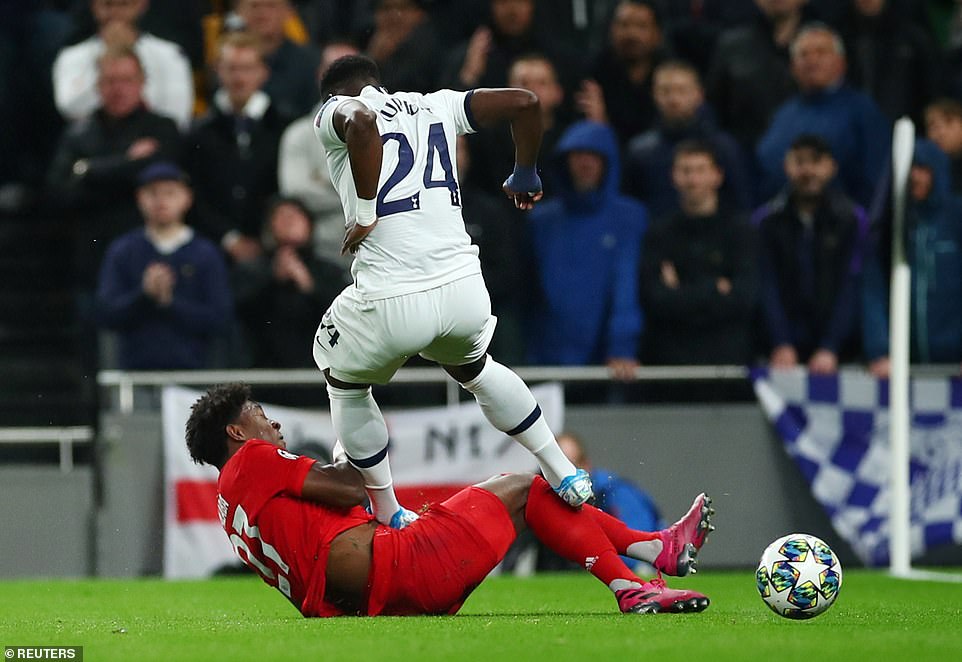 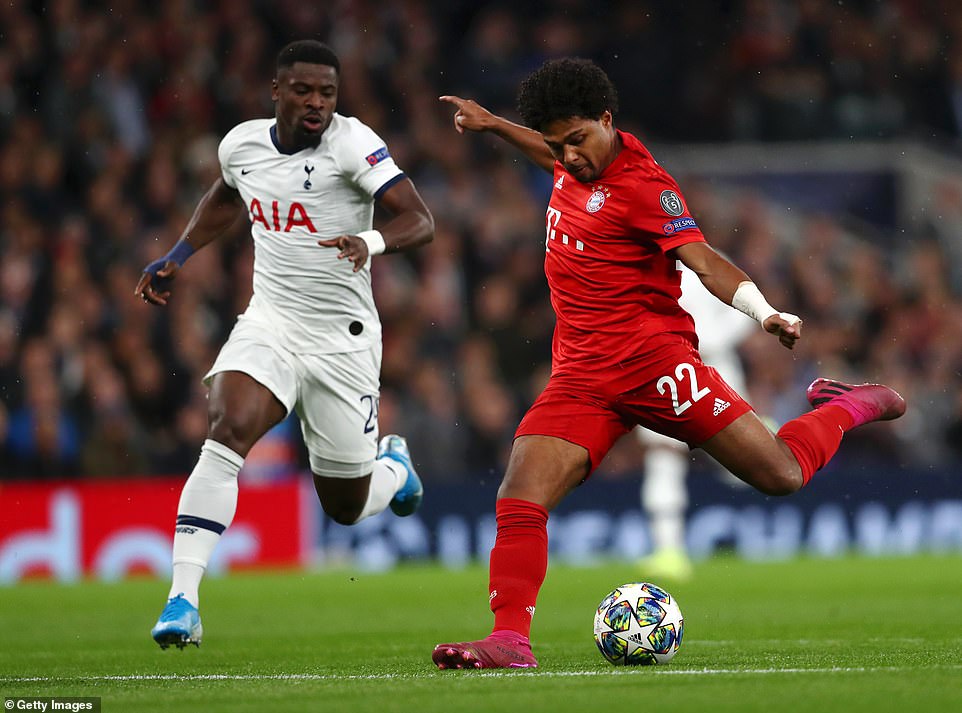 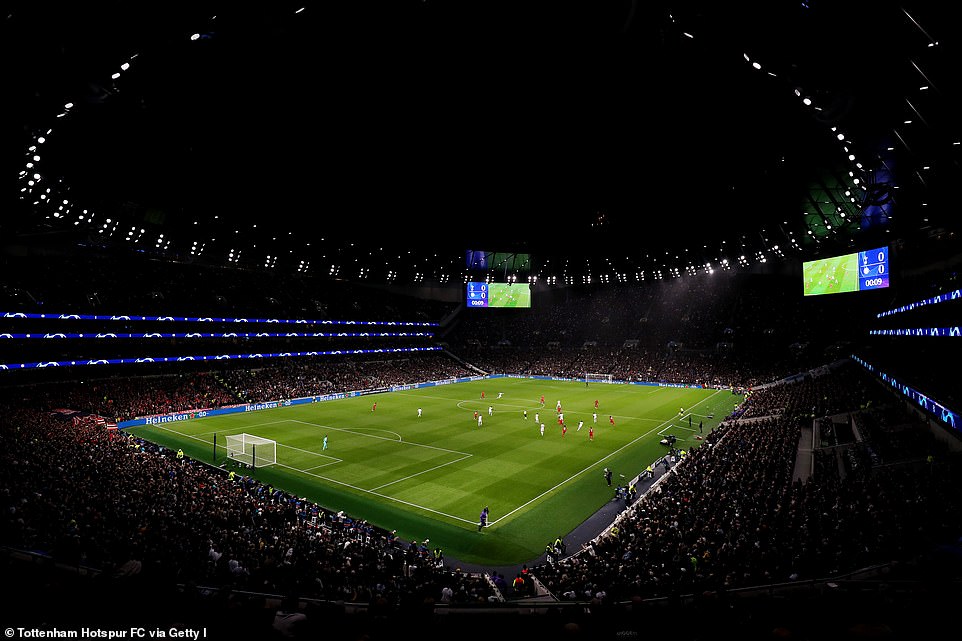 Augsburg 0-1 Bayern Munich: Robert Lewandowski on target AGAIN with a...