Robert Lewandowski was frustrated with Bayern Munich’s lack of transfer business this summer… now he’s the world’s most in-form striker, scoring a goal every 48 minutes and linking up well with new boy Philippe Coutinho

Robert Lewandowski cut a frustrated figure at Bayern Munich before a ball had even been kicked this season.

The German giants had suffered a humbling defeat to rivals Borussia Dortmund in the season-opening Super Cup and the Polish striker was far from happy with what he was seeing.

After that stifling evening at Westfalenstadion, Lewandowski criticised his club’s efforts in the transfer market. Franck Ribery and Arjen Robben had gone and James Rodriguez returned to Real Madrid after his loan spell, leaving Bayern desperately short in attack. 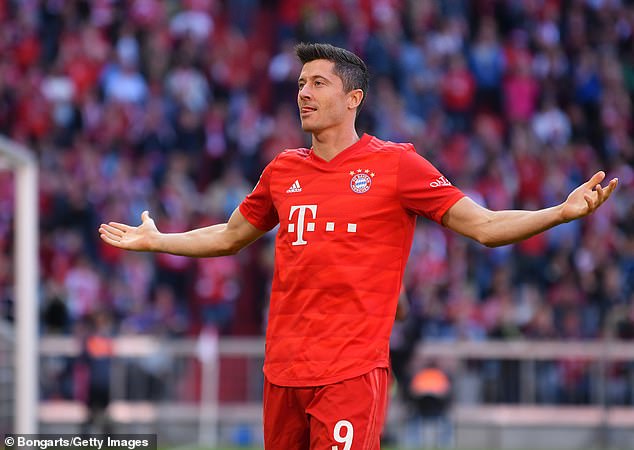 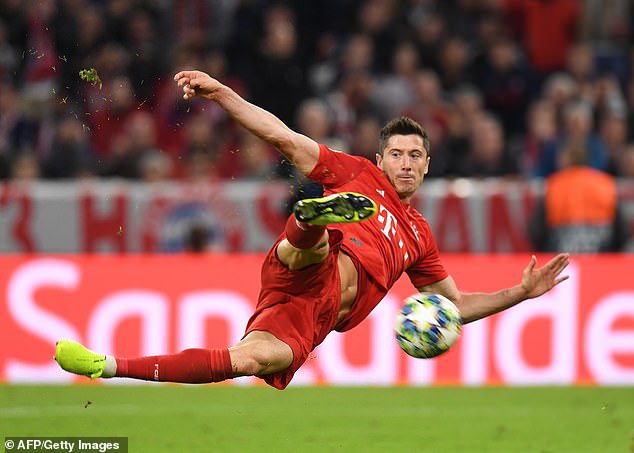 The Polish striker has scored nine goals in five Bundesliga matches, a goal every 48 minutes

‘I think we need three new players,’ he said in an interview with Bild. ‘We lost three players in attack and so far we have not had a [proven] new signing in that area.

Bayern chief Karl-Heinz Rummenigge took note of his star man’s concerns and splashed out on Ivan Perisic and Philippe Coutinho to bolster the offensive ranks.

Now, with the new Bundesliga season just five games old, Lewandowski has hit his stride and is arguably the most in-form player in world football.

Lewandowski has scored over 40 goals in each of his last four seasons in German football so it should come as no surprise, but he is well on his way to surpassing the 50 mark this campaign after a blistering start. 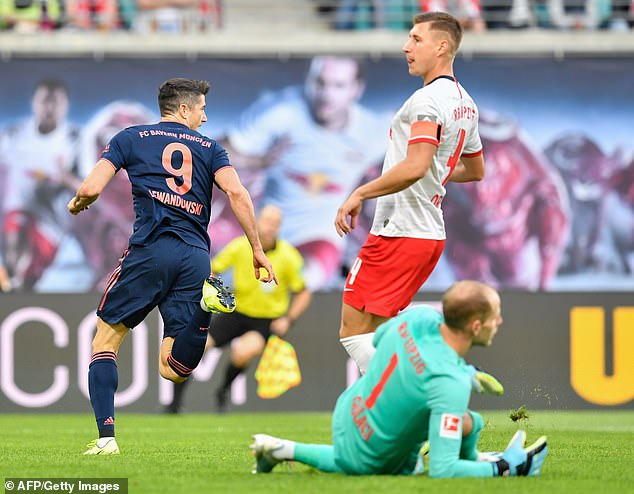 The Pole scored another brace on Saturday as Niko Kovac’s side overcame recently-promoted Cologne 4-0 at the Allianz Arena to stay within touching distance of early pace-setters RB Leipzig.

He is scoring crucial goals too. On match day one of the new campaign, Lewandowski struck a brace as Bayern struggled to a 2-2 draw with Hertha Berlin.

A week later he netted a superb hat-trick as Bayern clicked into gear and won 3-0 away at Schalke. The former Dortmund man then scored inside three minutes against title rivals Leipzig, only for Julian Nagelsmann’s side to equalise and earn a point.

Lewandowski has notched nine goals in five league games so far this season, averaging one every 48 minutes. For comparison Harry Kane has one every 134 minutes and domestic rival Timo Werner is scoring every 83 minutes. 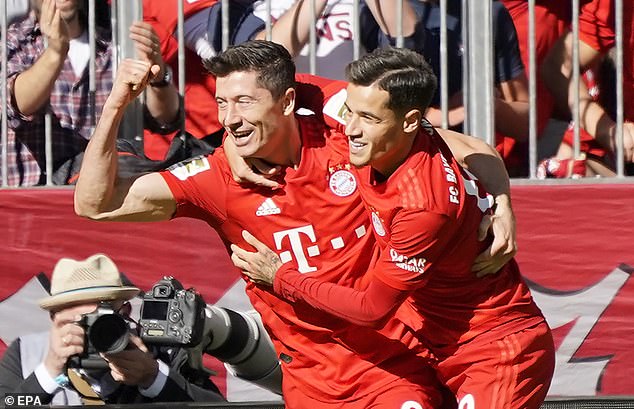 Lewandowski clearly seems to be relishing the extra creativity around him too. After speaking out against the club’s lack of business he has struck up a good bond with new boy Coutinho.

Instead of giving himself the chance to net a second hat-trick of the season against Cologne on Saturday, Lewandowski handed the ball to the Brazilian so he could score his first goal for the club.

When he arrived at Bayern, Coutinho claimed Lewandowski is ‘so much better than you think on TV’. That will strike fear into minnows Paderborn, who welcome Bayern and their goal-scoring machine this weekend.

Man Utd are ‘STILL an option for Gareth Bale’ despite Spurs...