By far the best thing that can be said about what we will now call the ‘Raheem Sterling affair’ is that it came this week and not next May.

Issues with players that occur in winter can be resolved. Those that take place on the doorstep of a major tournament can leave a longer lasting smell.

So in the weeks and months that follow Thursday’s match against Montenegro, which will surely secure qualification for next summer’s European Championship, manager Gareth Southgate will maybe begin to look at Sterling’s clash with Joe Gomez in a different light. 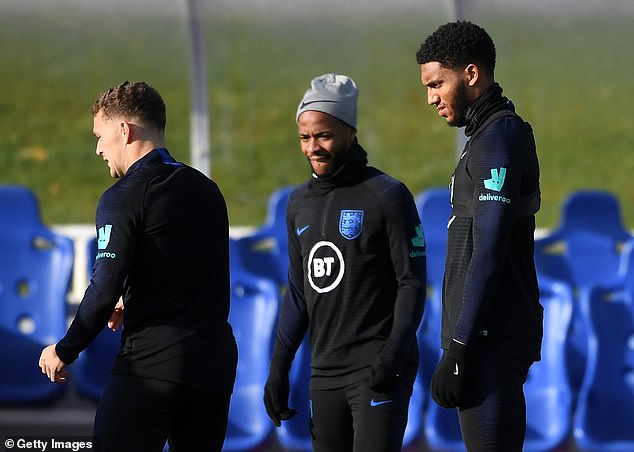 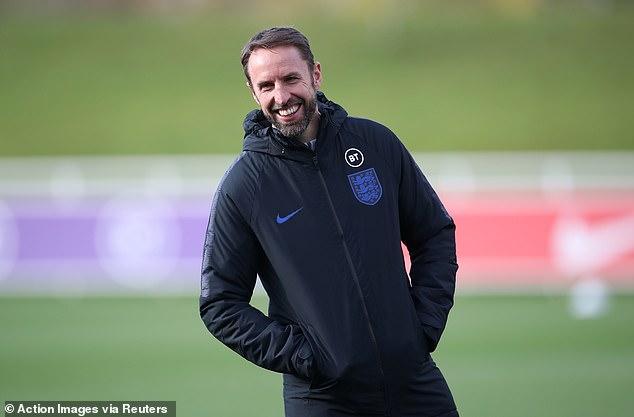 This week it has been a distraction and doubtless an irritation. Just one of the many factors that contributes to what Southgate described as a rather lonely job on Wednesday.

Equally, it feels a little now like an important bridge has been crossed. Southgate’s management style is generally more pastoral than confrontational and his players like him for that.

But this week has allowed Southgate to present a different side of himself to his squad and that may be no bad thing as he starts the lead up to one of the biggest years of his sporting life.

‘With any team, anything can happen at any given time,’ said Southgate. ‘We’re talking about human beings, it’s not robots, it’s not machinery.

‘The dynamic of the team and the emotion of individual people, at any given moment, can change and alter from one hour to the next. So, we’ve tried to deal with this week in the best way we can.’

Speaking at the Grove Hotel near Watford on Wednesday, this was a more phlegmatic, sanguine Southgate than the rather edgy version that addressed the media about Sterling 24 hours earlier at St George’s Park. 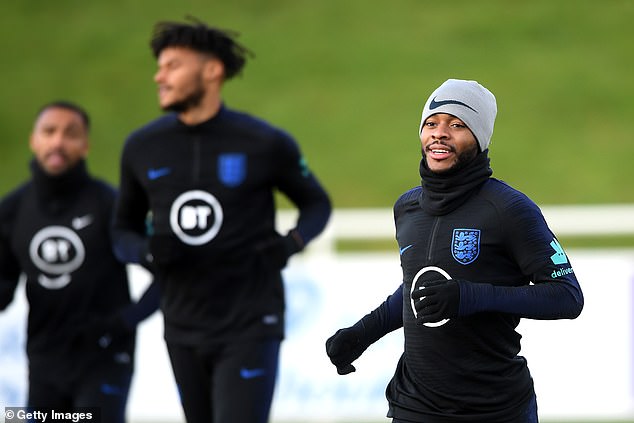 Sterling (right) will play no part in England’s 1,000th match when they take on Montenegro 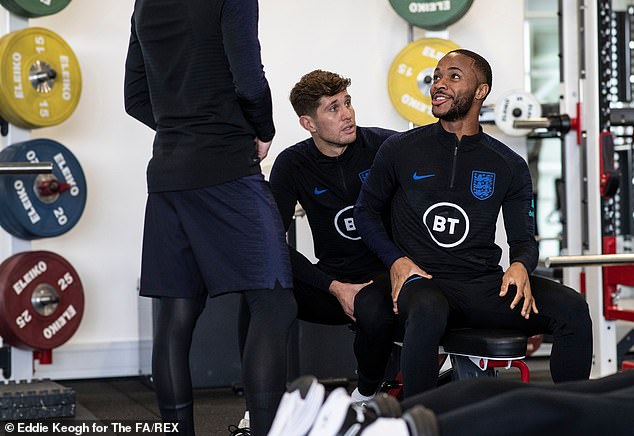 Maybe that was because an important achievement is now in sight. England will play their 1,000th game on Thursday and it will take place on his watch at Wembley with just one point needed to secure qualification for what is starting to feel like a home tournament next summer.

The fact that Sterling will not play will, by kick-off, feel like much more of an issue to him than it will to Southgate and that was doubtless the manager’s intention from the start. England could be about to take a big step forward and the fact it will happen without their best player will hopefully resonate with the Manchester City forward.

Montenegro should not represent stern opposition. They only have three points in the group so far. Southgate has been resisting the temptation to look too far ahead but here he did allow himself a glimpse into the short-term future as he discussed his options at the base of his midfield.

‘Other countries will have players of vast experience in that sort of position,’ said Southgate. ‘Names like Sergio Busquets, N’Golo Kante, Blaise Matuidi and Paul Pogba. That is the type of midfield that I’ve got in my head. So, we are looking at the level we’re going to have to play against in the European finals.’

Such is the vast pool of nations competing in qualifying these days that genuine tests for the established nations are rare. England’s defeat in the Czech Republic last month was their first in such a game for a decade. 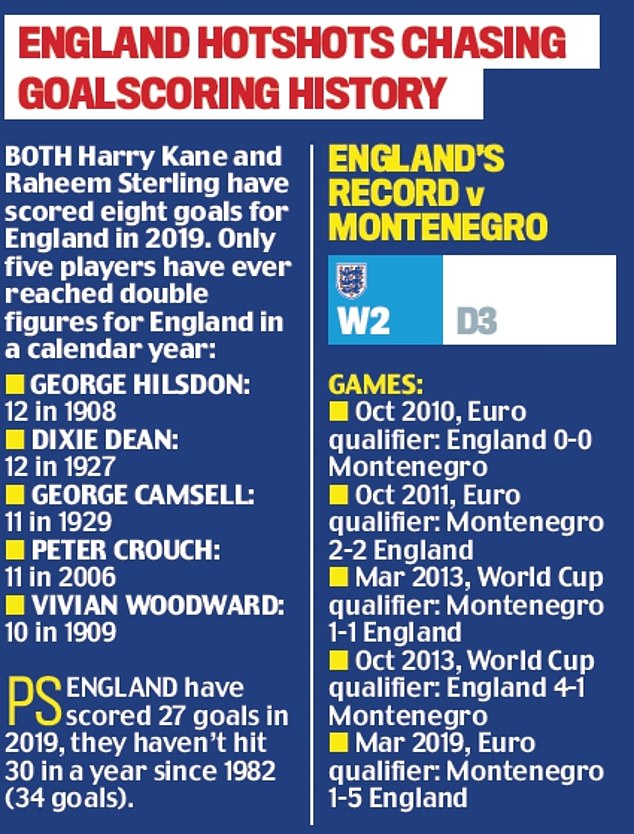 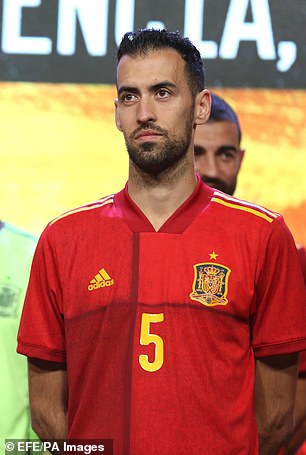 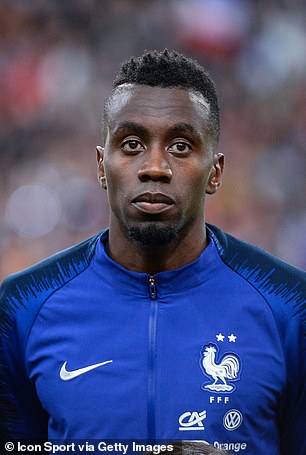 It is difficult, therefore, to know how promising this Southgate team really is. Already it looks different to the one that reached the semi-finals of the last World Cup. It feels better with the ball but less than secure without it.

Central defender Harry Maguire was asked on Wednesday what it felt like to play for England without a regular partner and though he answered diplomatically, it was a pertinent question.

Equally, Southgate could do with finding a holding player — or ‘pivot’ as he calls it — who is in decent form for his club. He has time on his hands but it will go quickly from now on.

‘I think there are very exciting times ahead,’ added Southgate. ‘But of course, you have to deliver and we’ve had teams with potential and promise forever. We will still find out more about certain individuals. We’ve tried to do that over the last couple of years. I think it’s a team that will excite people.’

Southgate himself played in a team that excited people back in Euro 96. That tournament was preceded by controversy as some of Terry Venables’ players were pictured in a notorious Hong Kong drinking den on a pre-tournament tour and then damaged part of the plane bringing them home.

It didn’t seem to do that team too much harm as they reached the last four. Some things change in football but the importance of what happens on the field does not. Southgate will be looking forward to a welcome diversion at Wembley. 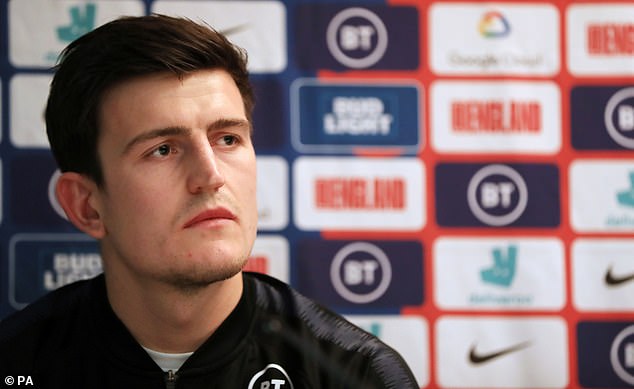 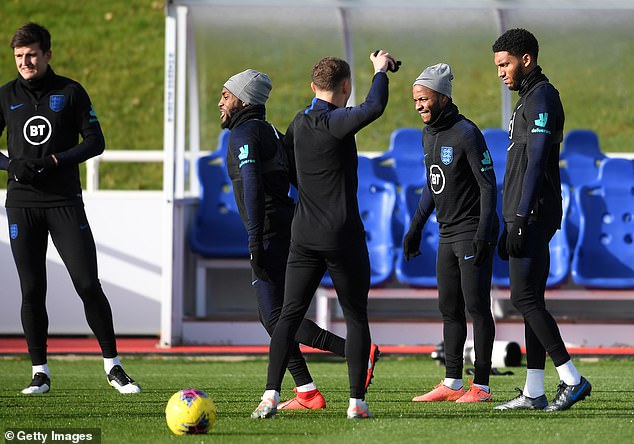 While all the talk has been on the Sterling affair, England can change the narrative at Wembley