United arrived at the Vitality Stadium in form and searching for a fourth successive away win in the space of just 10 days.

But their mini-revival was abruptly ended after former United forward Joshua King settled the rain-soaked south coast clash with a fine solo effort moments before half-time. 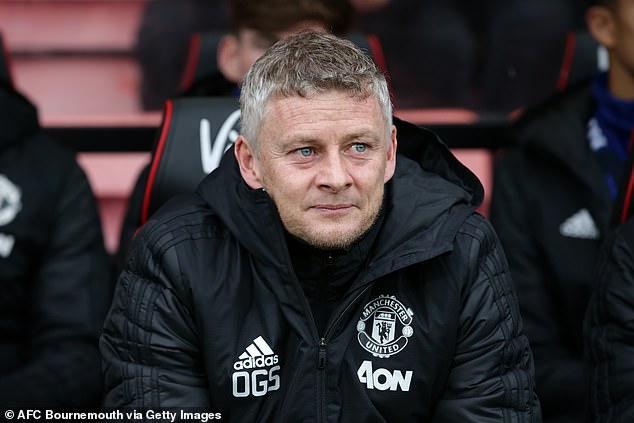 With just 11 games of the Premier League season played, the Reds are already playing catch up in the race for a top-four finish.

And Solskjaer, whose team have been reduced to Europa League football this term, has warned his players that they must dramatically improve in order to return to Europe’s premier club competition.

‘It’s a test of character when you come down to places like this; 1-0 down, half-time. I thought the response second half, at least we went for it,’ said Solskjaer.

‘We didn’t stop trying but it was the lack of quality that couldn’t give us the point or three. 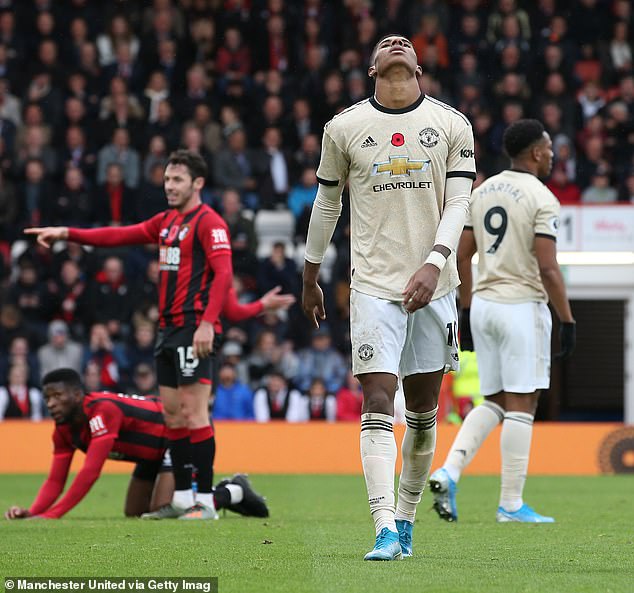 ‘We need a response because games like this you need to win if you want to challenge for the top four and today we’re disappointed.

‘But I don’t think it’s the effort or the want to do well.

‘For us we’ve had a good period going into this game, now we’ve got to react to a defeat and I am sure we will.’

United should have been full of confidence on the back of quick-fire wins on the road over Partizan Belgrade, Norwich and Chelsea in three different competitions.

But, after a bright start in Dorset, they soon faded as King found space in the box to pirouette past the out-of-position Aaron Wan-Bissaka and thump home on the volley.

The glorious goal was Bournemouth’s first in 359 top-flight minutes and condemned United to an 11th successive away game without a Premier League clean sheet.

United substitute Mason Greenwood struck a post as the visitors pushed for a late leveller but Solskjaer admitted his strike force ‘flattered to deceive’. 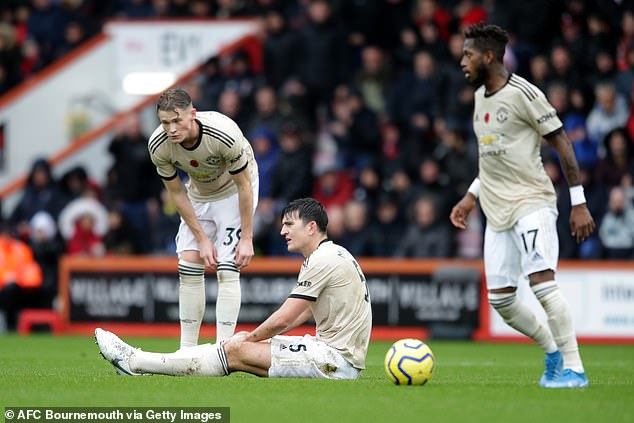 The Norwegian also expressed regret at not freshening up his team after naming the same XI which won last Saturday at Carrow Road, seven of whom started Wednesday’s Carabao Cup win at Stamford Bridge.

‘I think as a whole team we started well but we were lacking a bit of end product and the quality at the end,’ said Solskjaer.

‘I thought the front four looked promising but just flattered to deceive a little bit today. It looked like we could create chances but we just didn’t have the last pass or the last finish and that’s something we need to improve on.’

He added: ‘It’s natural when you play Wednesday night and then the early kick-off on Saturday that the physical stats might be affected.

‘That’s maybe my mistake. Maybe I should have, could have played a couple of others with fresh legs but I thought the ones that played against Norwich deserved another chance.’