A supporter responsible for displaying an ‘offensive’ banner about Liverpool striker Divock Origi during the Champions League match against Genk has been identified, Merseyside Police have said.

Reds officials liaised with police to have the banner, which they said ‘perpetuated a racist stereotype’, removed as soon as they became aware of it. 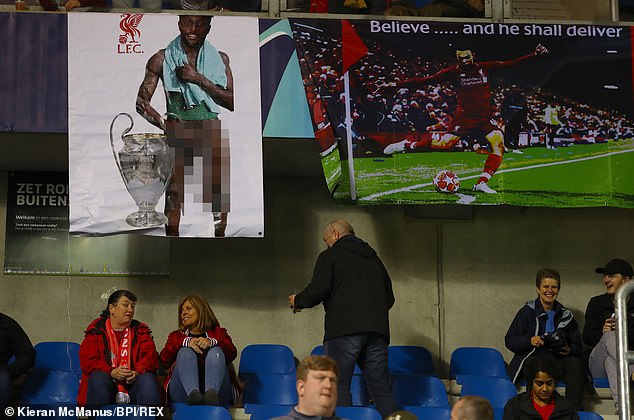 ‘We worked with Liverpool FC and the local authorities to identify the person responsible, and the local police in Belgium are now conducting an investigation.’

The explicit image – a picture of Divock Origi superimposed on to a naked black man next to the European Cup – was on display for a short period before Liverpool security guards arrived to confiscate and destroy it 35 minutes before kick-off.

Club officials were furious, given the banner’s racial implications.

UEFA did not comment on the matter on Wednesday night but it is almost certain they will take action against Liverpool; a recent example came in May 2018 when Bayern Munich were fined €25,000 for an ‘illicit banner’ that was on display in their Champions League semi-final with Real Madrid.

The governing body will await the reports of the match referee and delegate before deciding whether to open a disciplinary investigation in relation to the matter. 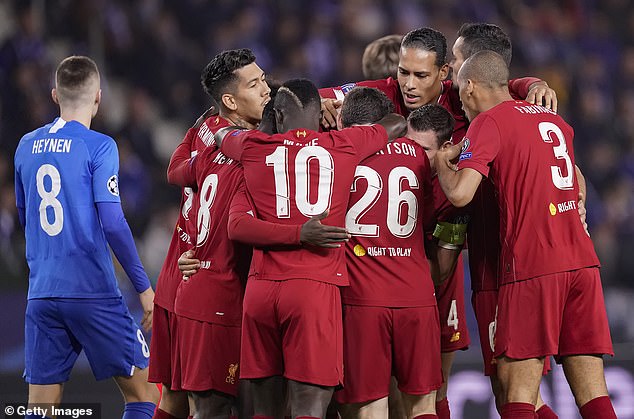 Liverpool were quick to condemn the banner in a statement released on Wednesday night.

‘Liverpool Football Club condemns the offensive banner displayed in our section of the ground, prior to kick-off,’ it read.

‘To be clear, the image used perpetuated a racist stereotype. This is completely unacceptable.

‘We acted swiftly to have the banner removed and we are now working with the local authorities and stadium team in Genk to identify those responsible.

‘Any subsequent action will be taken in keeping with our sanctions process.’

Supporters’ group Spirit of Shankly welcomed the swift action taken by the club.

A statement read: ‘Spirit of Shankly oppose all forms of racism. The club took swift action in the removal of the offensive banner that perpetuates racial stereotyping.

‘Football isn’t separate from society, it is part of it and we all have a responsibility in ensuring people understand there is no room for racism.

‘Simply banning people is not the answer. Education and reaffirming there is no place for discrimination in society has to form part of the solution.’