The warning signs were there for Liverpool. What the European champions thought would be a comfortable homecoming against Red Bull Salzburg turned into a much sterner test at Anfield.

Despite racing into a three-goal lead, the usual sense of impenetrability around Liverpool’s defence was missing. Japanese forward Takumi Minamino fired just wide for the Austrians early on before he was denied a goal by Adrian at 2-0 down.

But, probably most alarming of all, was how easily Virgil van Dijk went to ground after a fine piece of skill by Hwang Hee-chan that brought his side’s first goal and ignited a performance that can give Premier League teams hope. 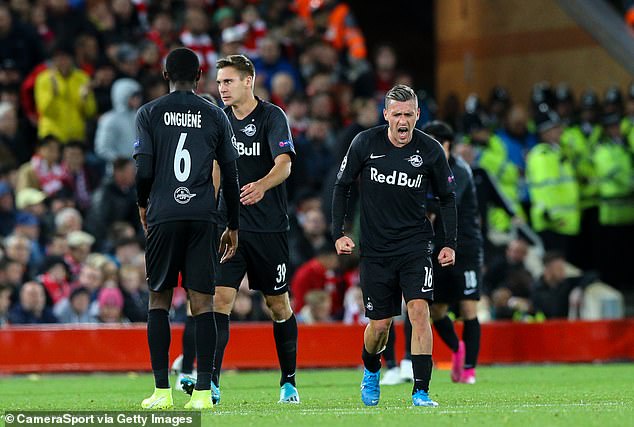 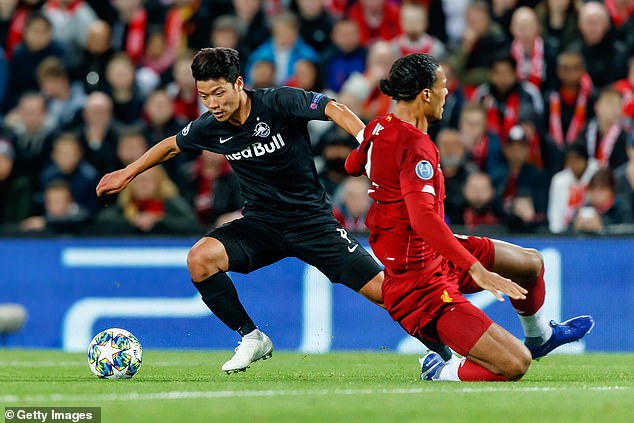 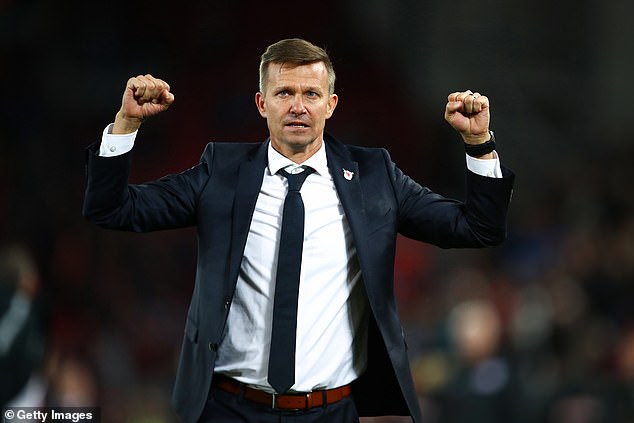 It is very rare to see an opposition team’s strikers stood between the edge of the penalty area and the half way line when Liverpool have possession at Anfield.

Salzburg were not afraid to press high up the pitch though, even if it did leave them vulnerable to one of Liverpool’s free-flowing attacking moves that brought both the first and second goals.

It was that desire that saw Jesse Marsch’s side win the ball back for their first of the evening as Jordan Henderson’s pass down the right to Mohamed Salah was cut out and the Austrians streamed forward.

The decision to play two strikers, as well as a very fluid system that saw Minamino constantly link up with the front two of Hwang and Patson Daka, also caught the Reds off guard.

It was Daka’s run through the left channel that drew the attention of both Fabinho and Joe Gomez, opening up the space for Hwang to collect the ball on the edge of the box. 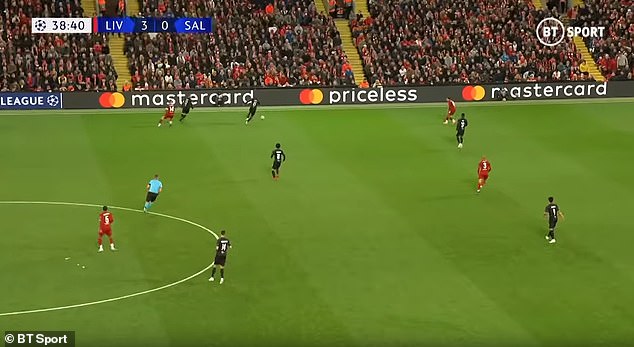 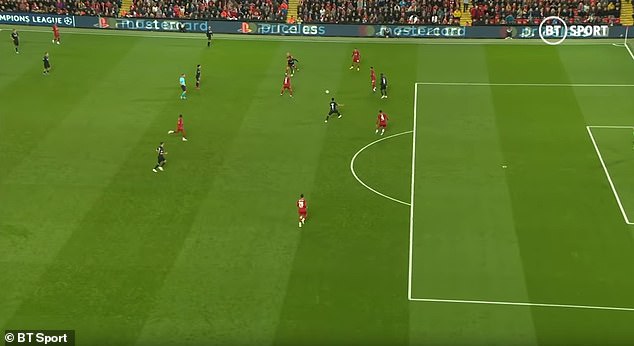 After winning the ball high up, Patson Daka moved left to to allow Hwang to collect the ball 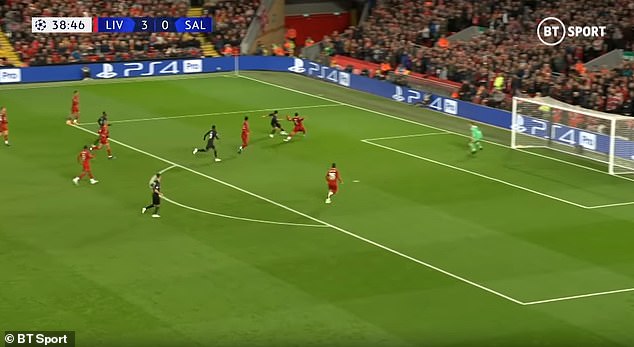 As he sped into the box, Hwang left the overly-committed Van Dijk on the turf with a great turn 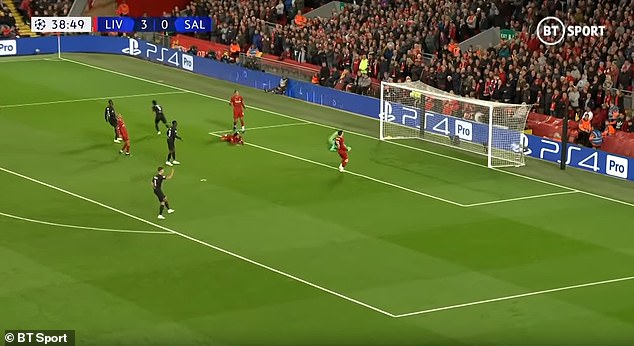 Van Dijk’s colossus reputation often means Premier League strikers think twice before trying to take him on. But Hwang showed no such fear as he left the Dutchman on the turf with a superb turn before firing into the far corner.

Their energetic approach continued after half-time and almost earned another goal when Adrian’s attempted pass to Gomez rebounded off of the lively Daka before going wide.

It was Salzburg’s quick thinking that earned them their second on the night. The Austrians won a free kick just inside Liverpool’s half and took it quickly as the hosts’ defence retreated.

Gomez had committed the foul, so he was out of position, while Trent Alexander-Arnold was also forward, leaving just Van Dijk and Andy Robertson against two attackers as the Reds chased back. 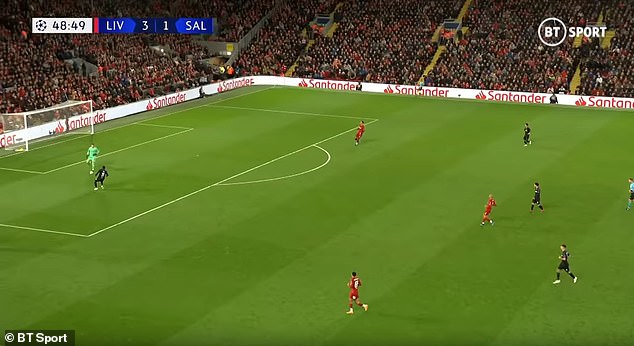 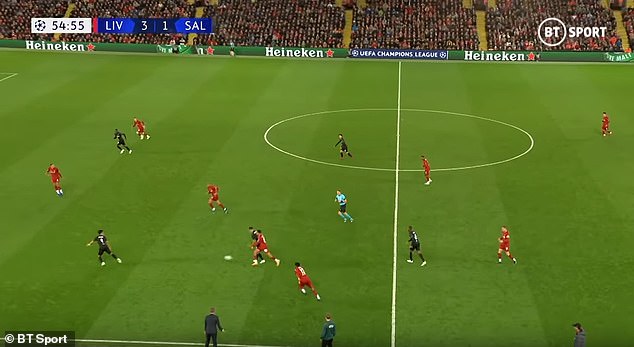 For their second goal, the Austrians won a free kick inside Liverpool’s half and took it quickly 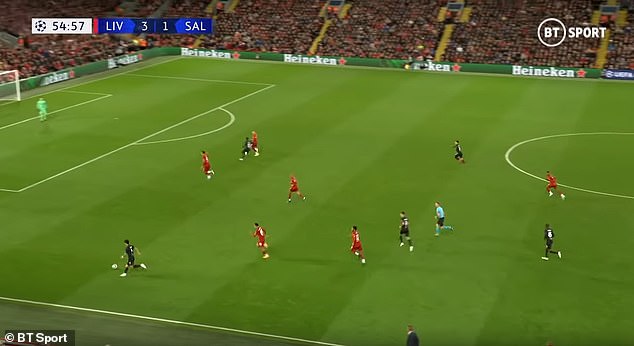 As Hwang ran down the left, Van Dijk and Robertson held their position centrally to mark Daka 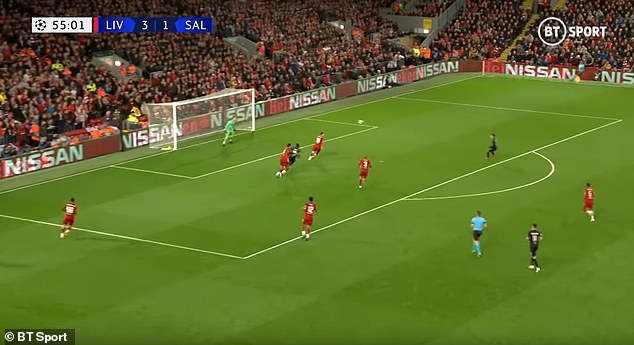 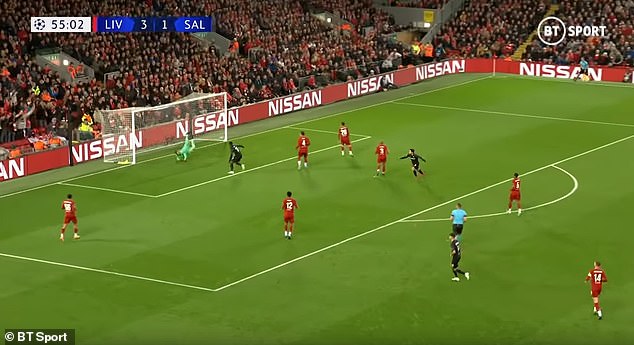 He volleyed Hwang’s cross first time, hitting a superb effort that flew into the back of the net

As Hwang ran down the left, Van Dijk and Robertson held their position in the box to mark Daka. However, Minamino had made a lung-busting run from midfield to join the attack.

He had acres of space on the edge of the box as Liverpool desperately tried to recover but boldly decided to volley Hwang’s cross first time, hitting a superb effort that flew into the back of the net.

Salzburg’s equaliser was a piece of superb intricate build-up play around the edge of the box that resulted in a tap in for Erling Braut Haaland.

Dominik Szoboszlai, who was reportedly being scouted by Arsenal at Anfield, played an inch-perfect pass to Hwang that dissected Liverpool’s midfield trio and set them on their way.

With Liverpool’s defence stretched again, Hwang fed the overlapping Enock Mwepu on the right hand side. At this point Gomez was stood five yards out of position with Haaland, who eventually finished the move off, unmarked in the middle of the box. 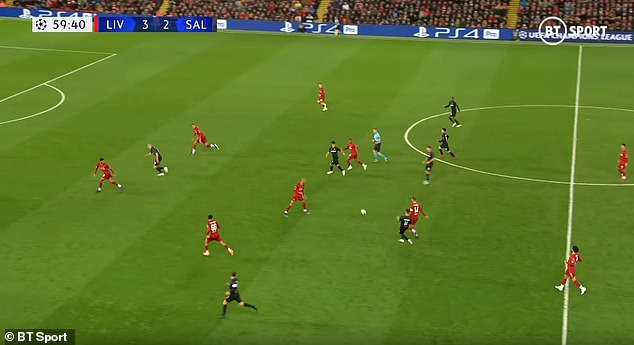 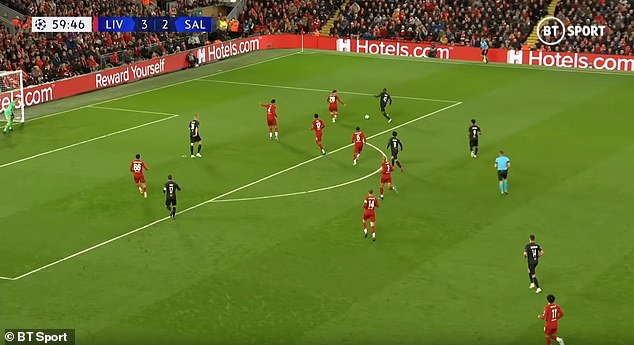 With Liverpool stretched, Hwang fed the overlapping Enock Mwepu on the right hand side 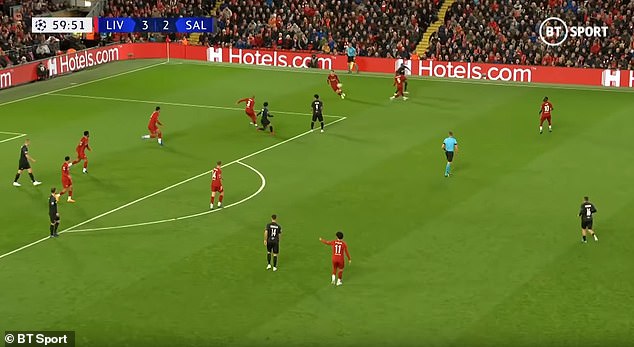 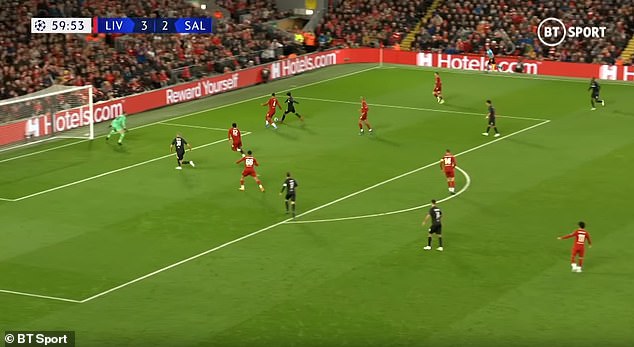 With Joe Gomez out of position, the Japanese forward fed the ball across the box to Haaland 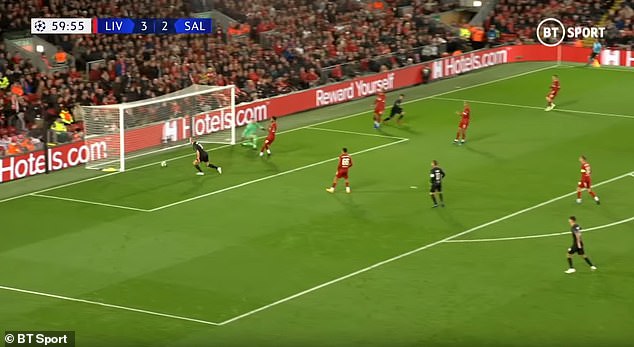 Robertson had, briefly, appeared to have shut down the attack as he ushered Mwepu towards the touchline.

But then the Zambian midfielder turned and played a hopeful through ball beyond the Liverpool defence that Minamino latched onto after Fabinho stumbled.

With Gomez still out of position, the Japanese forward simply fed the ball across the box to Haaland who had the easiest of finishes to level the game.

Mohamed Salah’s 69th minute winner ensured Liverpool got their European campaign up and running but, for about 25 minutes, the Reds were on the ropes.

There are lessons to be learned for their domestic rivals. Just like Norwich showed against Manchester City – if you are willing to play them at their own game you have every chance of beating the Premier League’s top two.

FSB partners with Captain Up

30.04.2021
0
Sportsbook and igaming provider FSB has paired up with Captain Up to utilise the company’s gamification and loyalty tool. The agreement will allow partners that...