Frankfurt have swept aside 10-man Bayern Munich as Adi Hutter’s men put five past the reigning Bundesliga champions at the Commerzbank-Arena on Saturday.

The visitors received their first red card of the season and were reduced to 10 men after just nine minutes when Jerome Boateng brought down Goncalo Paciencia as the last man.

Originally booked for the challenge which happened outside the box, referee Markus Schmidt went to the side of the pitch to review the decision before changing his mind to send off the central defender. 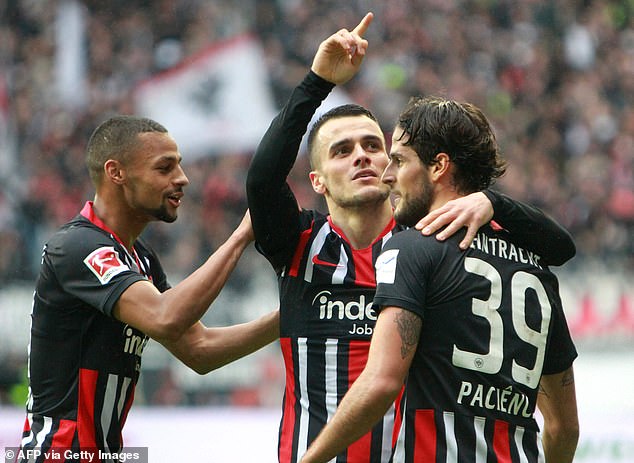 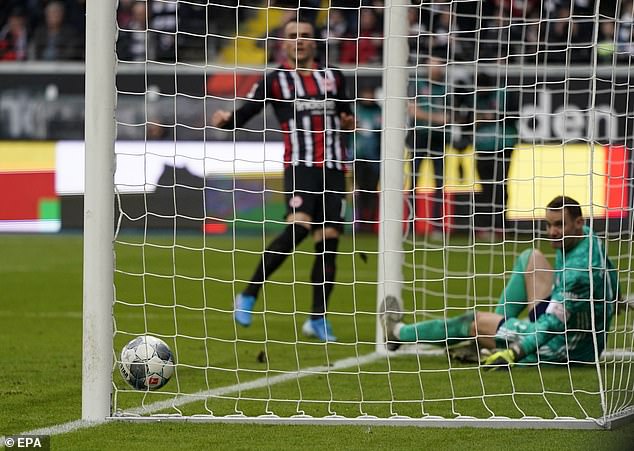 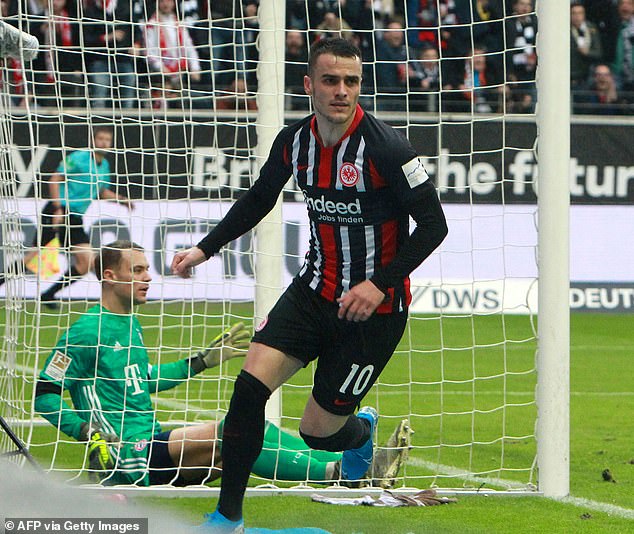 Frankfurt took advantage of the extra man when Filip Kostic was in the right place at the right time to tuck home a deflected shot to make it 1-0 to the hosts.

The lead was the doubled eight minutes later when Djibril Sow finished off a well-worked Frankfurt move, leaving Bayern dazed and on the ropes.

However, it was Robert Lewandowski who came out punching as the Polish striker muscled his way past two defenders before finishing under Frederik Ronnow, continuing his brilliant form in front of goal. 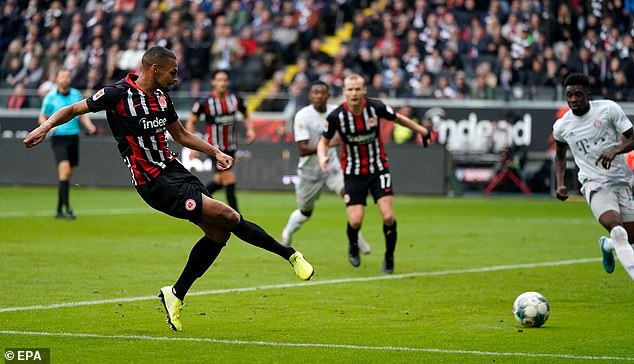 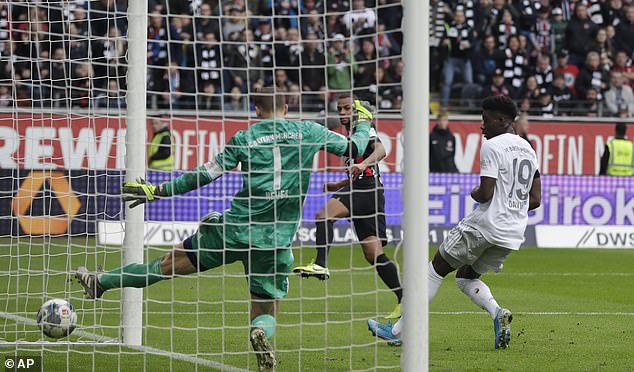 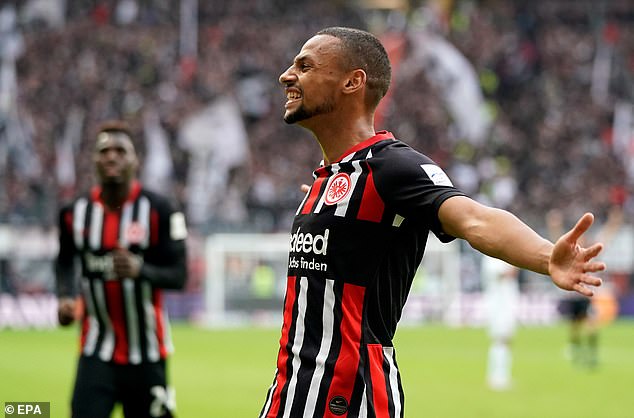 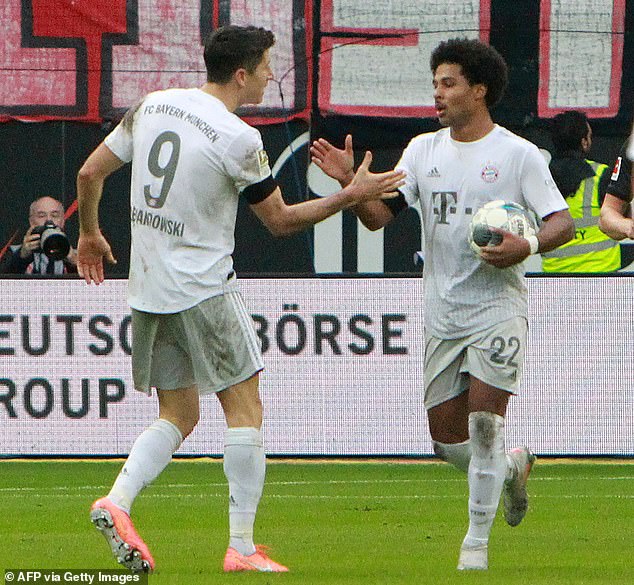 Lewandowski has scored in every game across all competitions so far this season meaning his strike on Saturday was his 14th goal in 10 Bundesliga matches.

David Abraham then restored their two-goal lead minutes after the restart when Danny da Costa curled a delightful cross to the back post for his team-mate to score.

After scoring the goal, Abraham was on hand to deny Lewandowski his second of the game just minutes later when he made a vital block down the other end.

Lewandowski was denied by Abraham again in front of goal with the prolific Polish striker not able to tap in his second.

Straight down the other end, Frankfurt got their fourth when Martin Hinteregger headed home a corner, notching his second goal in as many weeks. 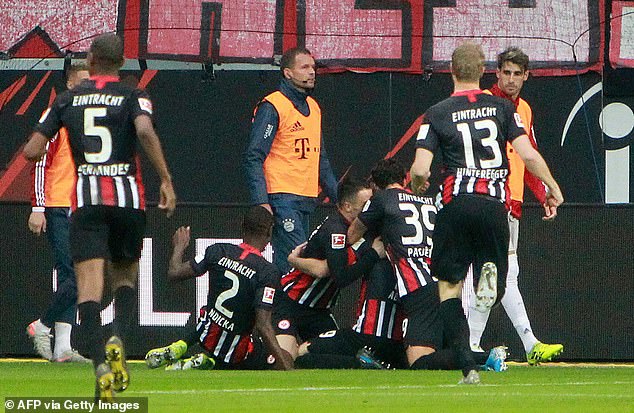 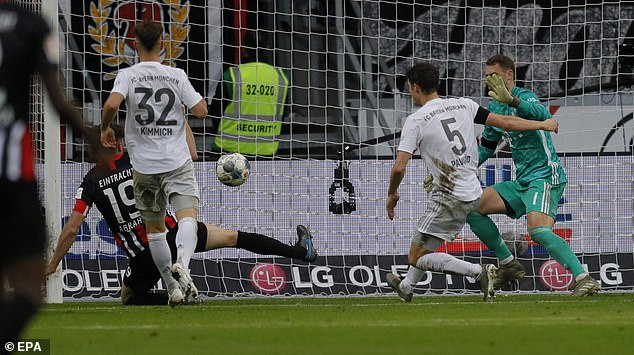 Abraham (No 19, left) was on the end of a brilliant Da Costa ball to make it 3-1 to Frankfurt

Manuel Neuer then denied Kostic with a fine save as Frankfurt look for a fifth against the 10 men of Bayern with half an hour left on the clock.

While Bayern continued to try, the ball just wasn’t falling for them after Alphonso Davies’ shot smacked against the base of the post and out for a goal-kick.

The rout was complete when Goncalo Paciencia was rewarded with a goal following his fine performance at home on Saturday.

The last time Frankfurt put five or more goals past Bayern came in the 6-0 thrashing on November 22, 1975, capping off a brilliant day for Hutter’s side. 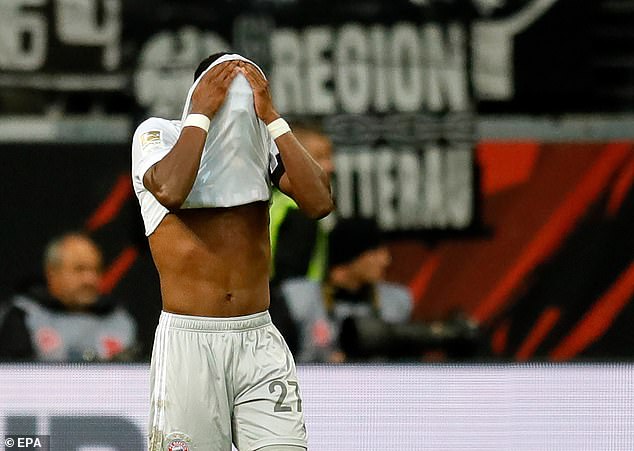 The result sees Bayern drop to fourth place while Frankfurt sit sixth in the table after 10 games.

Timo Werner scored a hat-trick as RB Leipzig went goal crazy for the second time in four days with an 8-0 trouncing of Mainz at the Red Bull Arena.

Leipzig thrashed Wolfsburg 6-1 in the DFB-Pokal in midweek and they showed Mainz little pity either, with Marcel Sabitzer putting them ahead after just five minutes.

Werner claimed his first of the match in the 30th minute, after which Christopher Nkunku, Marcel Halstenberg and Yussuf Poulsen all followed suit, leaving Mainz trailing 5-0 at the interval. 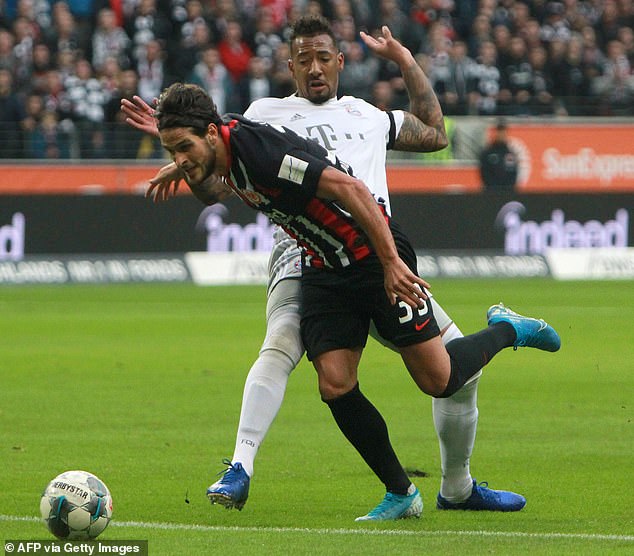 Jerome Boateng (back) brings down Goncalo Paciencia (foreground) outside the box 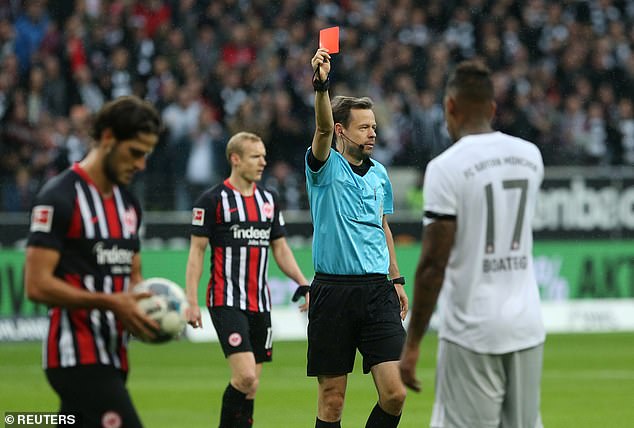 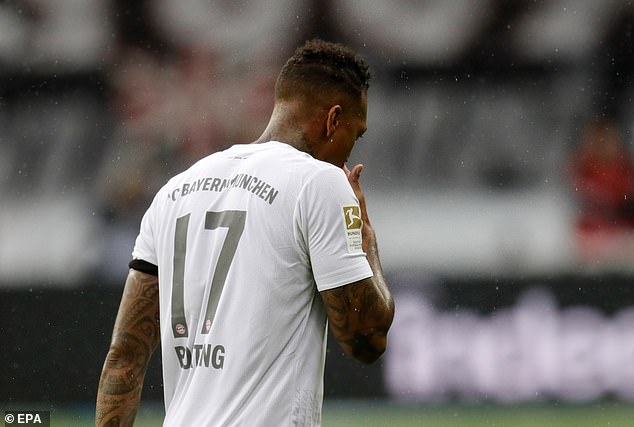